Communications service provider strategic and business model issues that were challenging before the Internet became far more acute afterwards. The widely-held notion that access providers were in danger of becoming “dumb pipes,” with application value migrating up the stack, is not misplaced.


The fundamental problem is that the historic, vertically-integrated voice model is difficult, at best, in the Internet era, where the fundamental model of computing is horizontal (layers) rather than vertically integrated.


That, in turn, has profound business implications. Of four major market positions examined by BCG analysts, though it is possible for a traditional telco to keep its legacy business model, some might say that will prove challenging, as it requires both vertical integration (apps and access) as well as the ability to maintain profitability with only incremental improvements to the key processes and services.


The problem is that the logical moves that could provide sustainability move in contradictory directions: towards a real focus on “hyper-scale” wholesale operations with massive scale, without worrying about innovation.


The other direction leads towards apps or platforms, both of which arguably are built on non-traditional telco skills and competencies.


The four types of roles “require different skills and motives, present different financial profiles to investors, and need to be managed on different time horizons.,” BCG argues. “A company can flourish in multiple layers—Amazon does it—but most organizations consistently underestimate the enormous challenges.”


Communities of users, professionals, and small entrepreneurs are typically found toward the top of the stack (application layer). “They flourish when uncertainty is high but the economies of mass are weak and where innovation comes through many small, seat-of-the-pants, trial-and-error bets,” BCG says.


Infrastructure organizations are typically found at the bottom of the stack. “They are most useful when uncertainty is low and economies of mass (specifically scale) are overwhelming,’ says BCG. “heir core competence is in long-term, numbers-driven capacity management.”


Curatorial platforms, narrowly defined as organizations that exist solely as hosts for communities, are a hybrid. In the stack, they lie immediately below the community they curate.


Traditional oligopolists occupy the broad middle of the stack. They have the advantage when uncertainty is high but not incalculable, and economies of mass (scale, scope, and experience) are significant but not overwhelming, BCG argues.


They exploit economies of scale and scope by placing big bets on technologies and facilities and make incremental improvements in products and processes.


Telcos and cable TV companies are “traditional oligopolists.” To sustain that role, they must sustain or create vertically-integrated services, continue to operate with economies of scale, and hope that incremental improvements are sufficient to sustain the business model.

That is a tall order, given the declines we continue to see in all the core legacy services. And that is why strategy now matters so much, and why Internet of Things now matters hugely. IoT might offer the best opportunity for creating a big, new vertically-integrated replacement business. 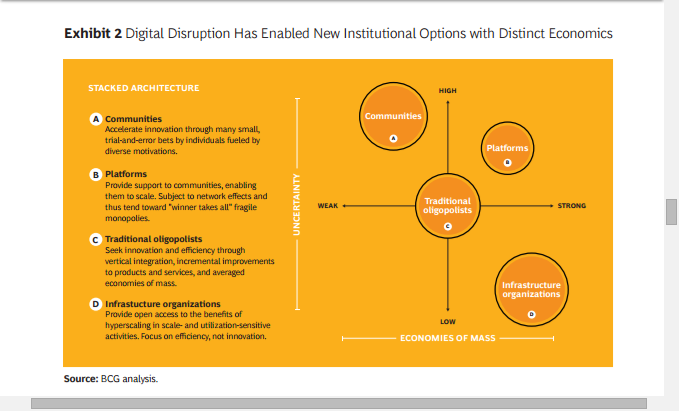