Terminal decline is the phrase the Economist Intelligence Unit uses to describe the fixed network telecom business. Harsh words, perhaps, but instructive if one honestly has to assess the direction of public policy about fixed telecom networks.


The most fundamental observation: it does not make sense to add more regulation for an industry “in terminal decline.” If an industry really is dying, regulation that further distresses the business model is not needed, and ultimately does not matter.


Competitors often continue to argue that incumbent fixed network suppliers must be heavily regulated, because they have such overwhelming market power. But it is hard to square that position with the actual trends in the business.


If there are exceptions to the broad theme, it is the Internet access business, as well as mobility.


As the rollout of 3G and 4G connections proceeds rapidly, widening access to mobile broadband in developing markets, in 2016 Internet penetration is forecast to surpass 50 users per 100 people for the first time, the EIU says.


The other notable trend in mobility, aside from Internet access, is the role of content services.  Generally, “operators are likely to be less focused on acquiring new customers in 2016 than in coming up with plans to deliver more sophisticated and enticing content,” EIU argues.


The main point, though, is the prognosis: “terminal decline.” All strategy in the fixed network business has to be based around that one main trend. 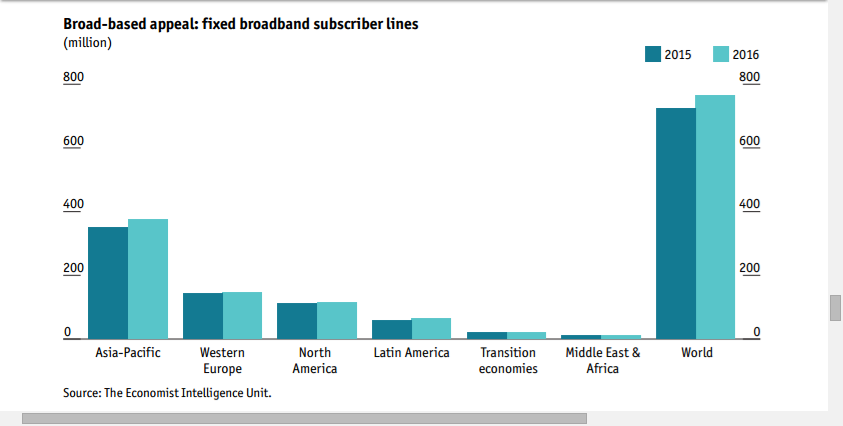