Incumbent telcos often face business model challenges when evaluating next generation network platforms. The biggest problem is that investments sometimes have to be justified on a number of drivers, since the incremental revenue is questionable.


Fixed network telcos, for example, have struggled to justify fiber to the home investments strictly on the basis of incremental revenue (linear video entertainment has been the one new revenue stream).


There is little advantage in the voice segment, and while FTTH or other fiber access networks underpin higher Internet access speeds, telcos generally have been unable to match the faster increases provided by cable TV operators.


Voice over LTE provides another example in the mobile business.
Deloitte Global predicts about 100 carriers worldwide will be offering at least one packet-based voice service at the end of 2016, double the amount year-on-year, and six times higher than at the beginning of 2015.


That will mean some 300 million customers will be using Voice over WiFi (VoWiFi) and Voice over LTE (VoLTE); double the number at the start of the year and five times higher than at the beginning of 2015.


So what is the upside?


“For most carriers launching VoLTE or VoWiFi in 2016, the primary motivation is likely to be to increase network capacity and extend the reach of their voice services,” says Deloitte.


Note what is not said: VoLTE and VoWiFi will drive higher revenues at a significant level. While eventually new revenues could emerge, that is for a later time.


What VoLTE offers, near term, is the ability to move voice calls off 2G and 3G networks and onto the LTE (4G) network.


The often lower frequency spectrum that is freed up can be reused for data services. So the benefit is indirect.


LTE is perhaps twice as bandwidth efficient as legacy voice, but that is a minor advantage in most cases, since voice occupies little bandwidth, and many users globally are shifting communications to text and social media.


Where it is possible to turn off a whole network, that also provides value. But, again, the benefits are indirect. VoLTE does not generally, at the moment, drive higher revenues. 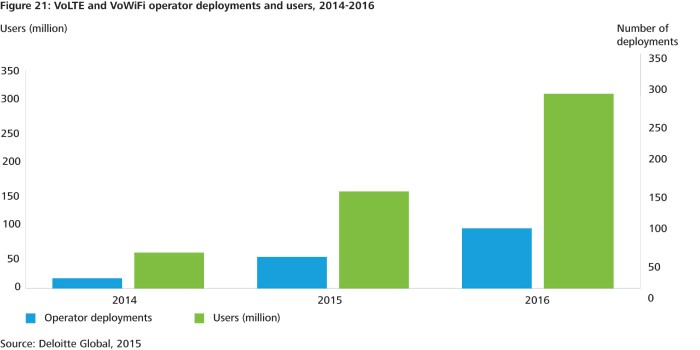