To say the global telecom business is “different” now since a wave of worldwide deregulation, privatization, investment and emergence of the Internet is a vast understatement. But consider just a few of the biggest changes.


Pre-1980, most national telecom infrastructures were dominated by a single monopoly provider, often owned by the government. In fact, telecommunications was widely believed to be a natural monopoly.


So prices were high, profit margins were high, innovation was low, revenue growth very limited, and the size of the market quite stable.


In 1991, state-owned telcos numbered about 150. By 2008, that number had dropped to about 70, according to the International Telecommunications Union. By 2008, some 125 nations had fully or partially privatized former state-owned telecom companies, lead especially by mobile operations.


At the same time, the emergence of the Internet and mobility reshaped platforms, the way applications are developed, the power and influence wielded within the ecosystem, business models and value drivers.


At the same time, communications capabilities were rapidly extended to those who previously had no access, rather suddenly transforming a market where perhaps half the world’s people could not “make a phone call” to a world where most adults now have such access, after just a few decades.


And while a similar change, allowing everyone Internet access, is only now underway, it is reasonable to expect that challenge also will be solved, more rapidly than anyone originally might have believed possible.


It is worth remembering that, until the 1980s, most analysts and regulators assumed telecommunications was a natural monopoly, akin to roads, bridges, sewer services, water and electrical services.


The corollary was that “competition” was believed not to be possible.The best regulators believed they could do was manage the social contract, balancing monopoly supply with price and profit controls.


In wider context, the 1980s was a time of new thinking about regulation of businesses formerly thought of as natural monopolies. In a growing number of instances, regulators decided telecommunications actually was not a natural monopoly, and began deregulating the business. 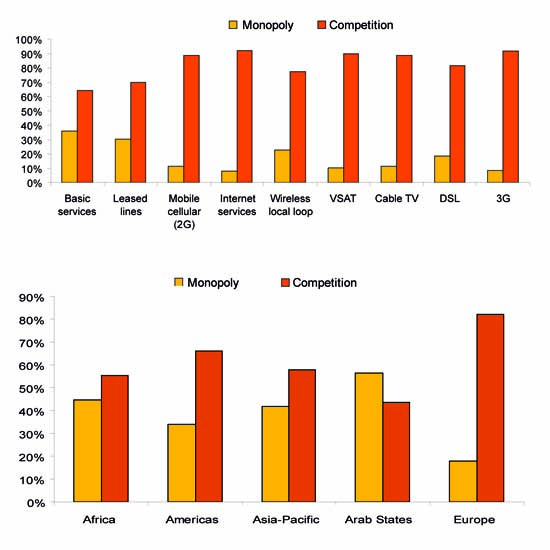 
In many markets, especially with the advent of mobility, we now see that telecommunications is not, in fact, a natural monopoly. There is at least some room for facilities-based competition, though the number of viable contestants will be limited.


That does not generally mean “unlimited” competition is sustainable. Telecommunications is so capital intensive that only a few viable contestants can sustain themselves, long term.


So fixed and mobile telecommunications are best thought of as oligopolistic, where only a few leading suppliers actually can exist in a market.


There are key implications. It likely never will be possible for more than a few facilities-based competitors to survive in any market.


That naturally will lead to thinking about regulatory policies based on robust wholesale obligations. The downside: robust wholesale tends to depress both investment by the existing carrier, and market entry by new carriers.


So the issue is not monopoly versus widespread market entry, but between monopoly and the best-possible (sustainable) level of competition among a limited number of contestants. That always will be a judgment call.


But that also poses issues for telecom regulators. If the regulated markets will, under the best of circumstances, only support a few suppliers, where is the boundary between oligopoly conditions where there is not enough competition, and oligopoly under which there is reasonable competition?


In other words, says the FCC, even high levels of concentration do not necessarily mean a market is uncompetitive. Such markets might, in fact, be substantially competitive, even when other measures say they are not competitive.

We might not like the situation, but in some industries--including telecommunications--oligopoly is the pattern. There always are smaller niches within the market, but typically the amount of activity is a small fraction of total market revenues.
at January 02, 2016