In Many Cases, Key Result of Gigabit Internet Access Will be Uptake of "Less Than Gigabit" Services

Gigabit internet access connections might seem a clear case of abundance way beyond a user’s ability to consume such bandwidth.


Nevertheless, Deloitte Global predicts that the number of gigabit per second Internet connections will climb to 10 million by the end of 2016, up an order of magnitude from the 2015 level.


About 70 percent of those connections will be bought by consumers, about 30 percent by businesses.


Greater availability and reasonable prices will drive adoption. Perhaps of equal importance is the prediction that, in 2016, some 250 million consumer locations will be able to buy gigabit connections, and will not.


By 2020, some 600 million subscribers may be on networks that offer a Gigabit tariff as of 2020, representing the majority of connected homes in the world, Deloitte says. Of those 600 million potential connections, between 50 and 100 million consumers might actually buy gigabit services (between five and 10 percent of the potential buyer base).


At the end of 2012, the average entry level price for gigabit service was over $400. By the third quarter of 2015, the average had fallen to under $200, and the cheapest package was priced at under $50, Deloitte says.


The likely result of all those gigabit offers will in many cases be that consumers opt to buy faster connections, but not at the full gigabit rates. Internet service providers that sell gigabit connections and no other speeds will see the highest adoption.


Telcos and cable TV companies that typically offer a range of speeds will probably find most consumers satisfied with speeds lower than a gigabit. 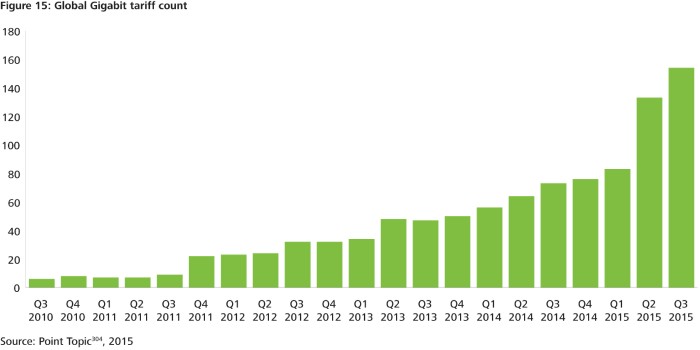