80% of U.S. Industries Have Yet to Reap Advantages of IT


That forecast assumes dramatic increases in application of information technology to the 80 percent of private sector industries that have not yet reaped the gains of IT.

Though “causation” arguably is difficult to establish, digital industries have had triple the productivity growth of the physical industries in recent years.


For the 14-year period between 2000 and 2014, productivity growth for digital industries has averaged 2.8 percent per year, compared to 0.9 percent for the physical industries.


“Today, tech/telecom spending per worker in the digital industries is almost seven times that of the physical industries,” Mandel says. 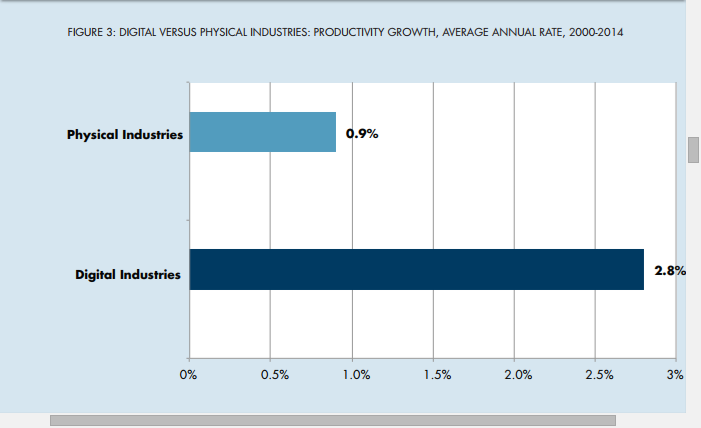 
Much information technology investment over the last several decades has mostly occurred in segments of work that involve “digital” products or output, such as such as professional services, finance, entertainment, or that involve digital buying, even if fulfillment is quite physical, such as retailing or other commerce.


Likewise, parts of life such as education, game playing and communication.


The perhaps-obvious corollary is that the benefits of information technology have yet to transform “physical” industries to the same extent as “digital output” industries.


Slow productivity growth is correlated with the failure of “physical” industries such as manufacturing, healthcare, and construction to make good use of digital technologies, Mandel argues. “Successfully digitizing physical industries will require a vast increase in remote sensors and remote-controlled devices such as cars, drones, and construction equipment,” he argues.


Those sensors and processes will monitor and control construction drones, self-driving snow plows, industrial processes and micro-pumps to precisely control insulin and other hormones in the body, for example.