Though barriers clearly remain, progress towards the goal of making Internet access available to everyone has made substantial progress. For some observers who can remember a time when we were not sure we could actually enable voice communications for everyone, there are clear reasons for optimism.

At the end of 2014, there were 2.9 billion internet users globally. By the end of 2015, the base of users should have reached 3.2 billion people, representing 43 percent of the world’s population.

So far, mobility has played the same important role for Internet access as it did for voice access.

During 2014, lower prices for data and rising global incomes have made mobile data packages of 500 MB per month affordable to 500 million more people.

To be sure, an estimated 2.7 billion people did not have mobile phone subscriptions in 2015, so there remains work to do.

Barriers to use of the Internet by people in lesser-developed countries has both supply and demand dimensions.


On the supply side, networks often do not reach remote areas, in large part because infrastructure costs are too high to sustain access, at current cost levels.


Also, recurring access costs are too high, running in excess of the “no more than five percent” of income levels that many analysts suggest is a threshold for significant adoption. Others might argue that mass adoption will not happen until costs are lowered to two percent or less of income.


But there are demand issues, including language. Content has to be relevant, and that often means in the local language. Literacy also is assumed for most Internet apps and services. 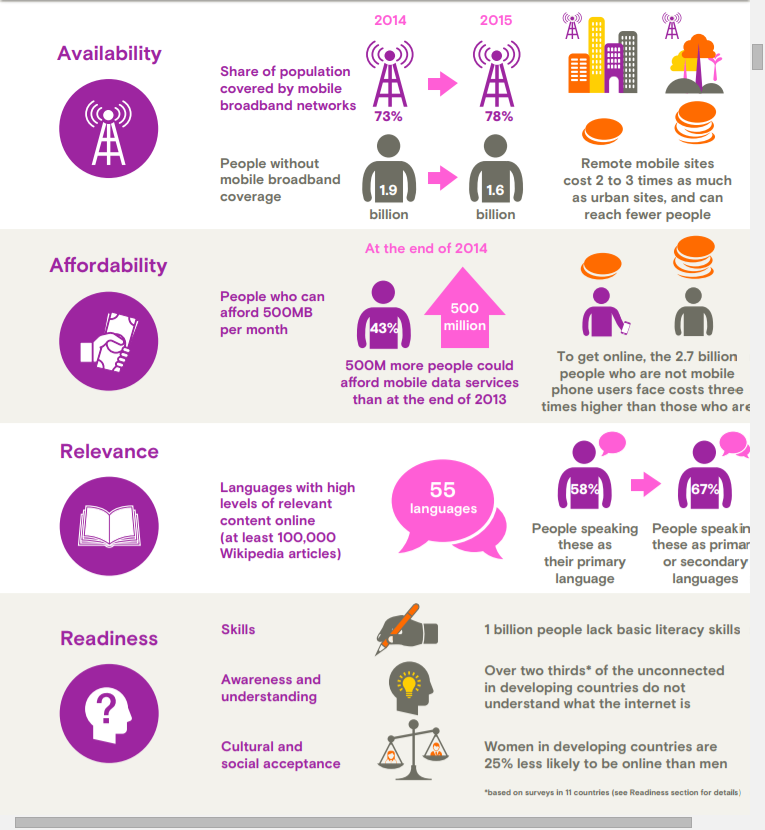