Altice will supply gigabit (1 Gbps) services to customers of its SFR cable TV networks in France, pointing out one advantage of a facilities-based approach to the problem of creating and sustaining both competition and innovation in fixed Internet access networks.


The global telecom industry tends to frame the access problem in terms of fiber or copper, this fiber architecture versus the other. At a policy level, the thrust often is to ensure robust wholesale policies, allowing many competitors to use a single infrastructure.


That has worked to spur competition, but not so well to ensure innovation. In the mobile sphere, regulators in some countries might even argue that multiple facilities-based suppliers (three, for example) has failed to produce robust competition, even if investment seems not to be a crucial defect.


Cable TV networks are the wildcard. For such networks, the issue rarely (business services are the exception) is a matter of the amount of fiber in the network but the modulation method and the spectrum allocation.


Cable TV networks essentially use over the air frequencies and radio frequency transmission, but confined within a waveguide, so all the normal principles of frequency division apply.


One might argue the new way to frame fixed network next generation network issues does not evolve around choice of media, but simply any method to boost bandwidth into the hundreds of megabits per second up to gigabit range, with retail prices people are willing to pay.


Cable’s advantages, in that sense, are stunning. In the U.S. market, cable TV firms have been adding Internet access customers at a higher rate than telcos since 2008, and the rate of gains has escalated over time. In 2015, for the first time, cable TV added accounts and telco accounts actually shrank.


The numbers are nuanced to the extent that telcos are losing all-copper accounts while still adding fiber-based access accounts. But, on a net basis, the copper-based losses now are greater than the fiber-based gains.


Some believe the trend now will gain momentum.


The point is that, at least in the U.S. market, access media is no longer the key issue, in one sense. Cable TV firms are able to boost speeds into the gigabit range without abandoning the hybrid fiber coax access architecture.


At some point, that is likely to be augmented by wireless access, as the heavy fixed costs of fiber to premises tend not to work so well in highly-competitive markets, especially markets where one of the networks (hybrid fiber coax) has clear capital cost advantages. 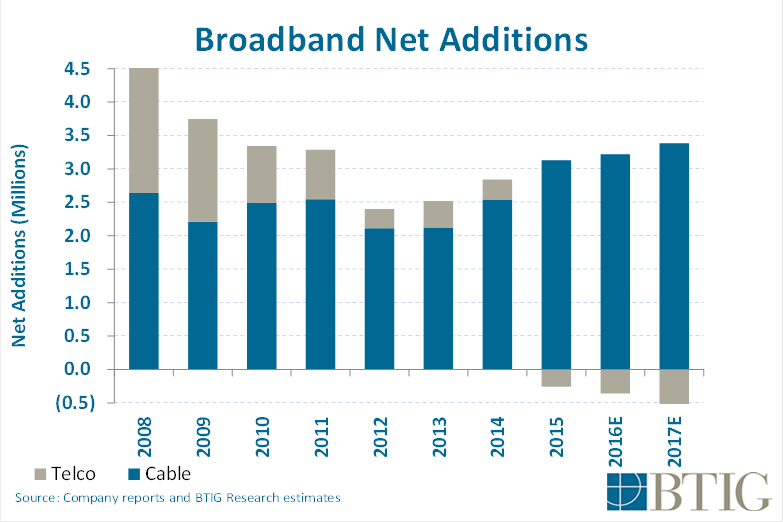