There was a time when PC marketing was about processor speeds. No longer.


At some point, end user value could not be demonstrated as processors got faster.


We have not yet reached the point where Internet access will stop being about “speeds and feeds” and start being about “what can you do with it?”


But that time will come.


In fact, some of you might already not be “buying” the value proposition for ever-faster Internet access. In other words, value often now is not about speed, at all. For any single user, beyond a rather low threshold (somewhere between 10 Mbps and 20 Mbps), incremental increases in speed do not matter.


The value proposition arguably is better in multi-user households, but even there one might make the argument that a five-person household will not generally notice experience benefits beyond a connection supporting 100 Mbps (when contention is highest, each user theoretically can use 20 Mbps).


Google Fiber asks, and tries to answer the question of What can you do with a gig?


Google suggests “streaming videos, movies, and TV shows” will happen with little to no delays or buffering.” Netflix Super HD video content is cited as an example of gigabit access connection value. But that feature also can be supported by 25 Mbps connections.


Google Fiber cites value for multi-user households, but again that is not exclusive to gigabit access speeds.


In fact, some might argue the advantage has nothing to do with speed, but with the lack of a data cap. Some Internet service providers currently cap data downloads at 250 GB per month.


Even if most users never encounter any experience issues, that could be the advantage for very-heavy users, though.


The point is that high speed Internet access remains in much the same position as PC OEMs once were, focusing on “speed” as the marketing platform. The industry has not yet--but will--reach the point that most consumers understand “speed” is no longer a reason to switch providers.


Then the marketing platform will shift in ways more tangibly related to end user value. Latency performance might already be the most-important value for some users, not speed. The problem for most ISPs is that clearly superior latency performance is hard to prove.


Beyond a certain point, latency performance advantages are hard to achieve.  As a generalization, latency is in the 75 milliseconds to 140ms range, even for sites that use a content delivery network.


The key point is that most U.S. ISPs have latency far below 75 milliseconds. So the bottleneck is the servers on the remote end of the connection, not the access links as such. 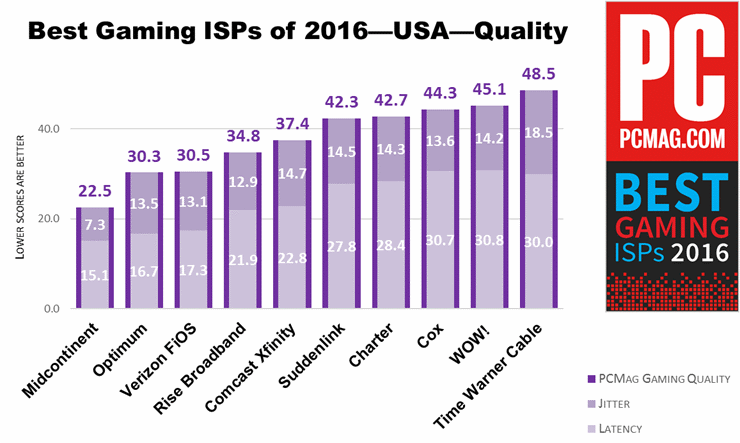