The Netherlands communications market will see an interesting real-world test of what happens when a market consolidates, particularly in the areas of prices for business services and churn rates, as Viggo and Vodafone merger their Netherlands operations.

Coursr Research, for example, predicts prices will rise as a direct result of the combination, as competition lessens.

Duopolies, though, have not always--perhaps almost never in the Internet era, lead to that result, for voice or data communications in the business segment, where prices have fallen for decades.

To be sure, prices often fall in hyper-competitive markets as well, for a time. When there are too many competitors, though, that often becomes unsustainable, and the number of firms that can operate in the market long term will fall.

The general expectation is that prices rise, when such consolidation happens. The issue is whether that actually happens. There still is evidence that even a duopoly can produce pro-consumer results (lower prices, better services, better service). The current fixed network market in the United States provides one example. 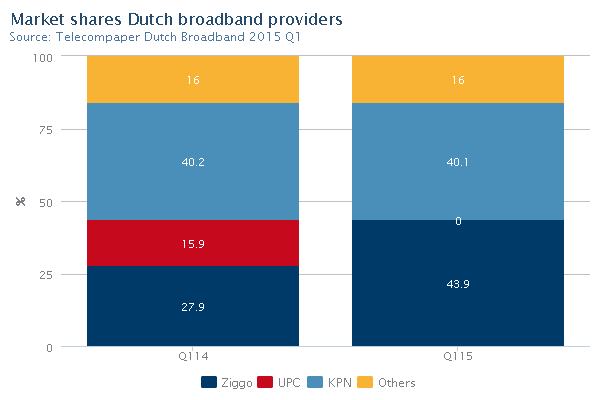 
Whether that also is true in the mobile market is an outstanding issue. In most markets, there are three to four leading providers, and regulators and policy advocates disagree about the minimum number of providers to produce effective competition.

The point is that there is not clear evidence even a fixed network duopoly necessarily produces higher prices and fewer other benefits, compared to a more-competitive market.

Also, increasingly, even the notion that a duopoly exists in the U.S. market is being challenged by Google Fiber, other independent Internet service providers and municipal operations of various types.

In a growing number of U.S. markets, there are two or even three providers of 1 Gbps Internet access. How far that can continue, and whether it is sustainable, is the issue.

The point, though, is that we cannot automatically conclude that a smaller number of providers in any market necessarily leads to higher prices for business or consumer customers. With the exception of content services, prices for data and voice have tended to fall, even in U.S. consumer “duopoly” markets.

Business services arguably have not been a duopoly for some time, as most U.S. markets have multiple providers of business data access and voice, far exceeding two providers in number, and at least a handful that are facilities based.

A combination of forces, ranging from new competitors to Moore’s Law (cheaper processing and storage), better radio technology, better air interfaces and efficient modulation techniques, optical fiber, new architectures, new spectrum and even regulation (allowing network builds in only some areas of a city) have combined to increase capacity and lower price-per-bit metrics.

Nominal price increases, where they have occurred, have to be seen in the context of customers buying services that are faster and offer more capacity, or provide unlimited domestic calling or messaging, for a flat fee. Even when customers spend more for some services, the quality and quantity of usage has changed dramatically.

Also, though one might expect quite a lot more customer churn in the wake of such a merger, where the new entity has greater ability to bundle a wider range of services (fixed and mobile), a
survey of 343 business customers by Coursr Research seems to be inconclusive on that score.

In any given year, in the U.S. market, perhaps 12 percent to 18 percent of customers actually change providers, arguably fewer in the business segment, however.

On the other hand, Coursr data also suggests the amount of definite churn would initially be quite low.

Very few would leave their current provider if the combined operation enters the market -- none at all out of Vodafone's business customer base, and just 3 per cent of Ziggo's customers. The joint venture would probably also pick up customers from other players such as T-Mobile and Tele2.

After the merger of Ziggo and Vodafone, the new firm will have a much-stronger position in the customer segment of businesses with 50 to 500 customers or more employees, at least in terms of installed base.

The installed base of customers in the communications market in the Netherlands shows strong KPN presence, among organizations of every size. 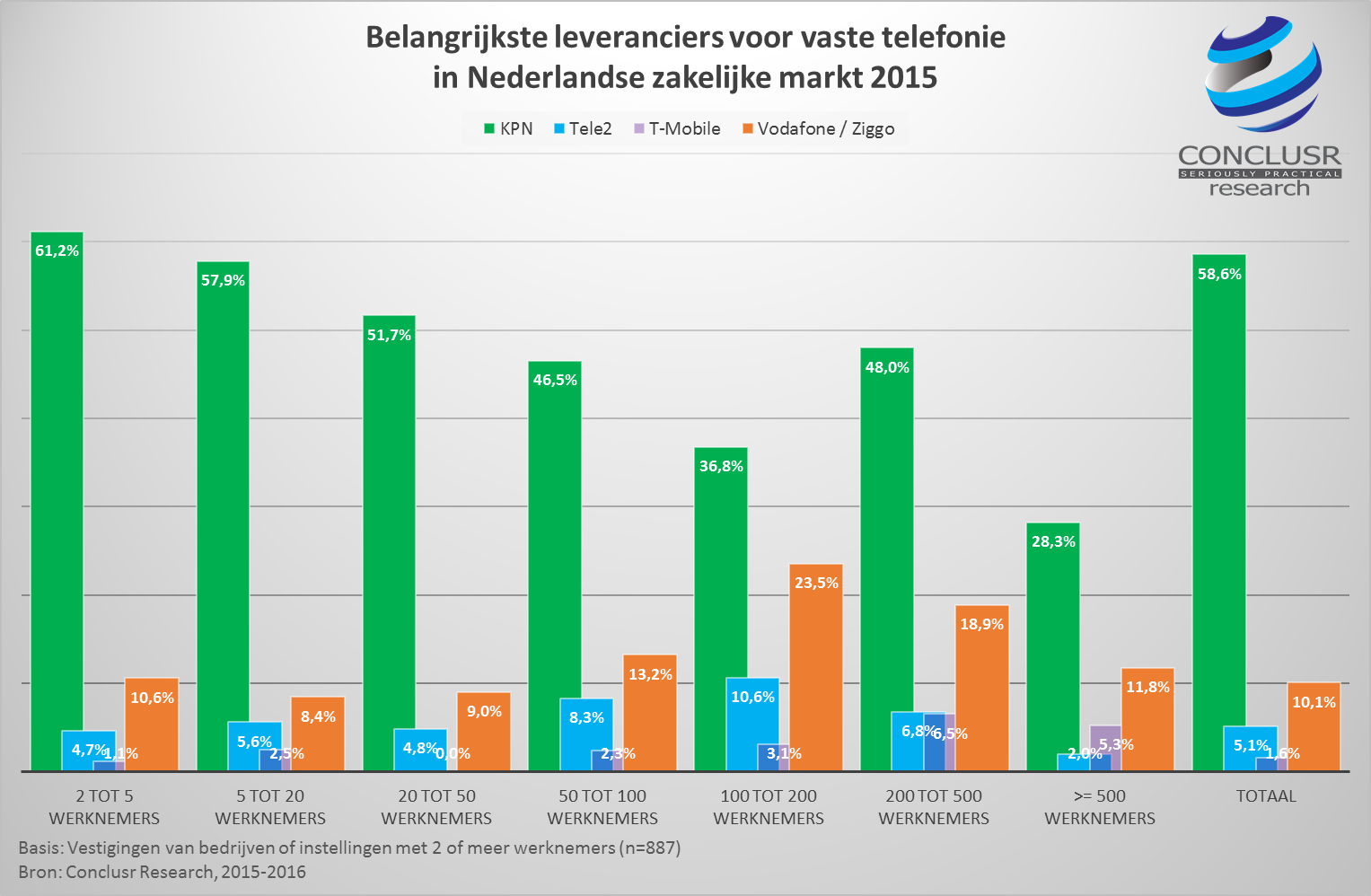 In the data services market, the combined Ziggo and Vodafone will be even stronger with small business customers, but with less installed base in the large enterprise market.

The issue is whether the new combination actually will lead to higher prices for business voice and data. Some think it will do so. Classic economic thinking would suggest it could, or even should do so.

But some real-world evidence suggests even a duopoly, and that will not exist in the Netherlands market, can produce competitive market benefits for buyers.

The new combined Ziggo and Vodafone arguably will have a stronger position where it comes to fixed network business data services. 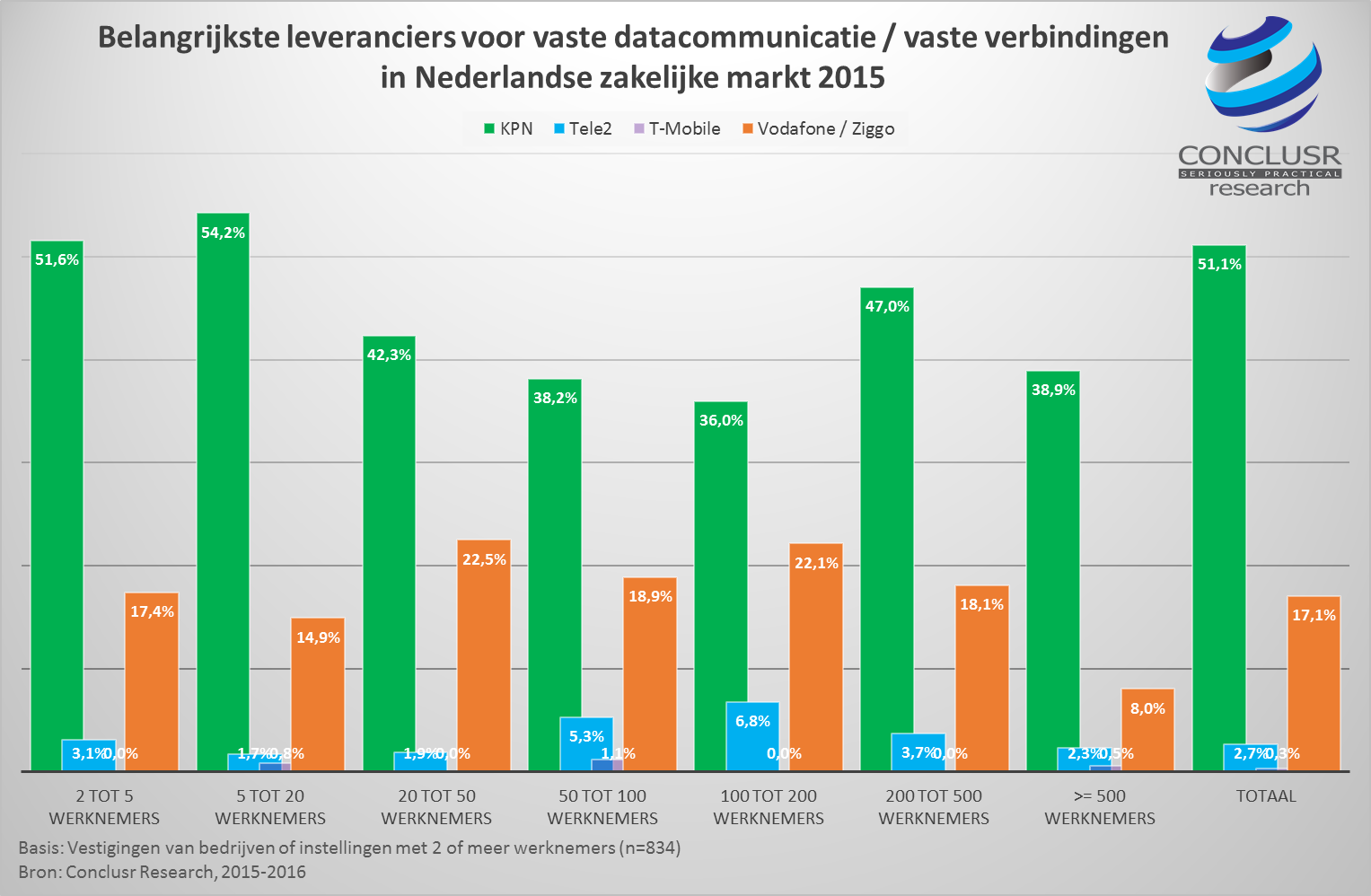 The new entity will be most competitive in the mobile segment of the business. 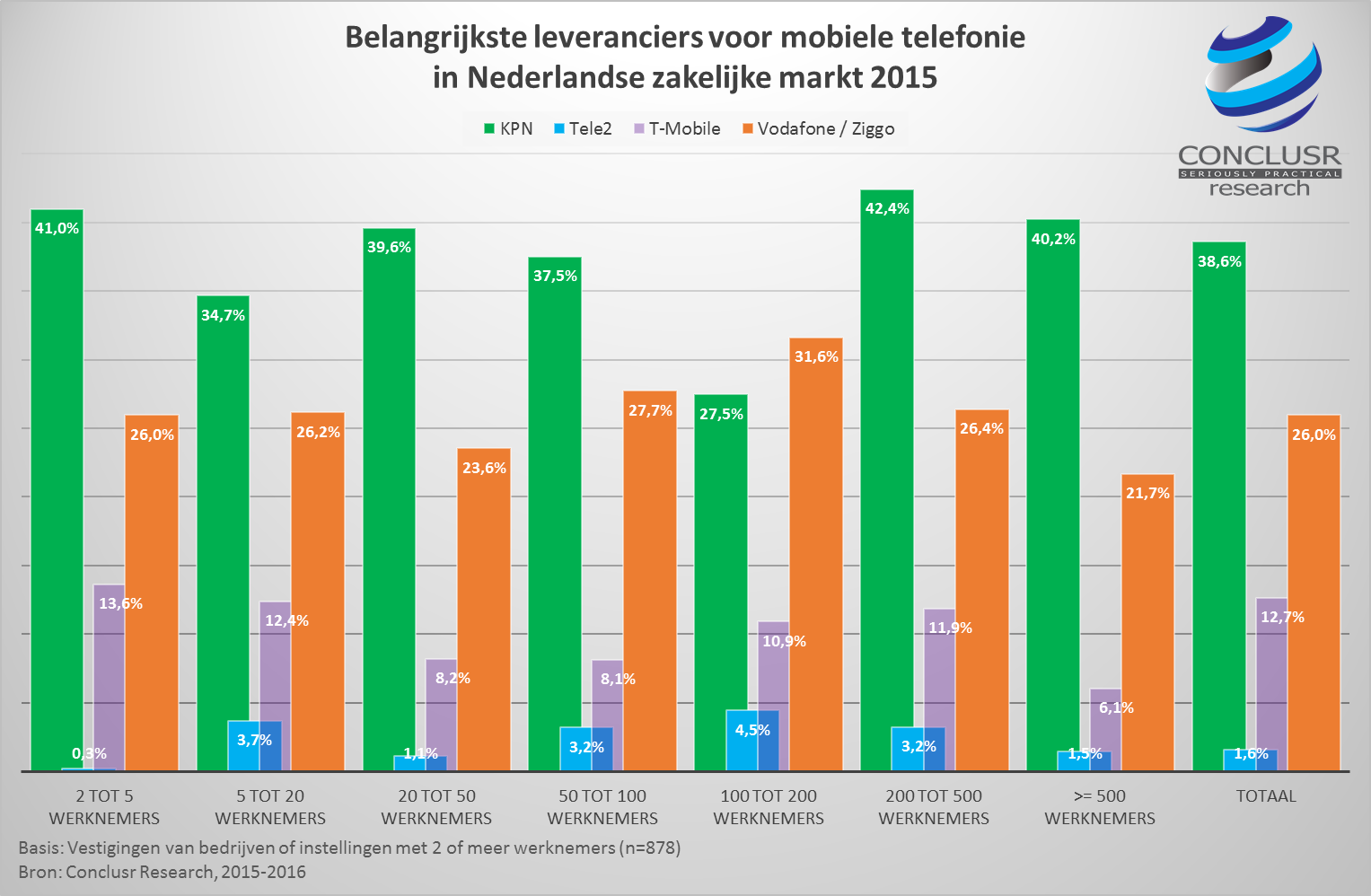