Some 104 entities have filed full or partial applications to the U.S. Federal Communications Commission indicating the firms have intention to bid in the forward auction of 600-MHz spectrum to be held this year.


Verizon, AT&T, Dish Network, T-Mobile US, Comcast and Liberty Global are among the entities who will be in position to bid. That list also tells one much about the future direction of U.S. mobile markets, as the list is lead not only by the largest U.S. mobile firms but includes the two largest U.S. cable TV firms (assuming the merger of Charter Communications and Time Warner Cable is approved).


But estimates of 84 MHz up to about 100 MHz have been suggested as the amount of spectrum to be sold.


T-Mobile US is expected to be a big winner in the reserve auction, which sets aside some spectrum for bidders who do not own much lower-frequency spectrum. The actual amount of the set-aside will hinge on the total amount of available spectrum.


AT&T and Verizon will not be able to bid for the set-aside spectrum, which could be as much as 30 Mhz, or little as 10 MHz, in areas where they hold licenses for more than 45 MHz of lower-band spectrum.

Contestant strategies might be more complex than is typical. Though bidders always have to weigh their spectrum needs with capital commitments. But capacity decisions are more complicated than usual.


Though the decision on where to bid, and how much to bid, will be driven by near-term requirements, the coming availability of additional assets (shared spectrum and millimeter wave spectrum), plus use of small cells and Wi-Fi, will shape thinking about what is possible, longer term.


The conventional wisdom is that, given a choice between adding new spectrum or adding more cell sites, a typical mobile service provider will spend less money acquiring spectrum than subdividing macrocell sites to increase density.


The new wrinkle is how overlaying small cells compares to the cost of buying new spectrum assets. Verizon has recently been arguing it will be cheaper, in many instances, to increase network density rather than buy new spectrum.


That would reverse conventional rules of thumb about the relative ways of adding capacity, where new spectrum typically costs less than redesigning a network for greater density, assuming the other alternatives (better air interfaces and modulation) are not immediately available.


New spectrum can take the form of buying new spectrum, or redeploying existing spectrum, as when older networks are decommissioned.


The tradeoffs are not easy to understand, as each particular scenario might depend on how well the new frequencies map with the existing network of cell sites. Buying spectrum might be more affordable, when it is possible.


But many would argue that, historically, most of the increase in mobile capacity has come from deploying more-dense networks. That works because using smaller cells allows intensive spectrum re-use.


What is not so clear is the cost of adding capacity using small cells, or buying new spectrum. It might well be the case that such choices are not possible, at the points in time when capacity must be added.


When that happens, the relative cost difference might not matter, as there is no practical alternative to sub-dividing existing macrocells. 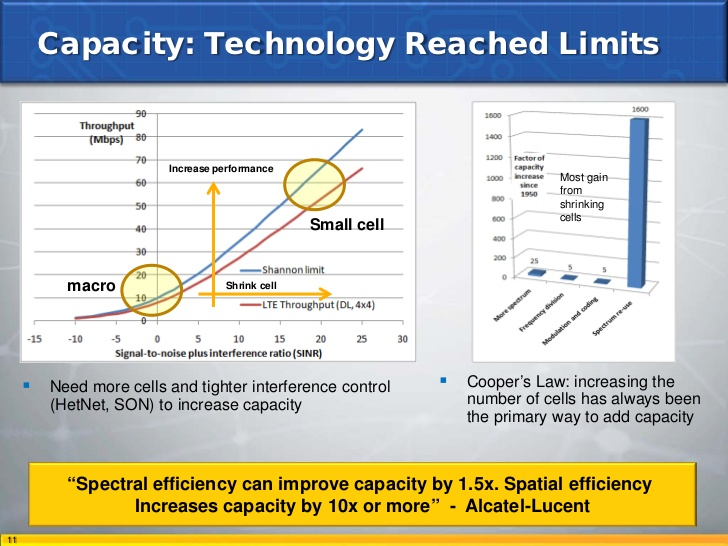