Large and unusual (“one off”) construction or development programs are very hard to model, cost wise. So many will not be surprised that the Australian National Broadband Network plan has been revised to reduce costs from original forecasts, but upwards from the level the adjusted plan conceived.


In a new report, the cost overrun is estimated at greater than AU$10 billion.


The latest 2015-2018 corporate plan (PDF) suggests that by 2018, the NBN will require at least $9.6 billion in peak funding beyond what the government is prepared to supply in the form of equity or grants.


Put another way, the business plan is not fully funded, though few would doubt ability to secure lenders, by about 2017, to close the gap.


The maximum “peak funding” will be in the range of AU$46 billion to AU56 billion, with a median estimate of about AU$49 billion.


Over the period of the current three-year plan, the network will reach four million premises, of which 20 per cent will be served by fiber to the premises. About 72 percent of locations will use fiber to the node (FTTN) and hybrid fiber coax (HFC).


That assumes that by 2018, 1.67 million premises will be activated on FTTN, along with about a million HFC premises, and 1.3 million on fiber to home networks.


The wholesale-only network presently aims to provide downstream data rates of at least 25 megabits per second (25 Mbps) to all premises and at least 50 Mbps to 90 percent of fixed line premises. 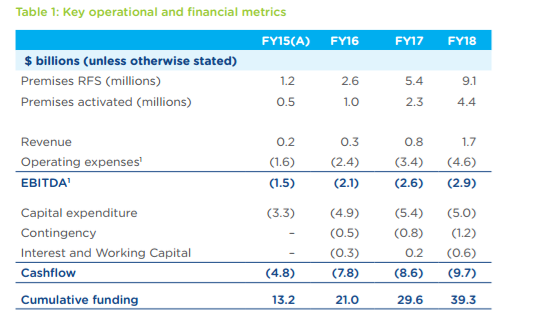