Can 5G Fix Profit Per Bit Per Hertz Problem?

Mobile operators have faced a rather persistent problem where it comes to profit margins on Internet access services. Simply, revenue generation has lagged consumption.


Still, as we already have seen, perhaps it is ability to shift access to Wi-Fi that most accounts for greater efficiency. In other words, the radio networks become more efficient, and generate more revenue per bit, when significant traffic demand is offloaded to the fixed network.


Not surprisingly, that is expected to be a big feature of 5G networks. Still, the issue is whether data access actually can be priced so that revenue exceeds the cost of supplying demanded bandwidth.


That will remain a big challenge. For starters, people seem to use more data with each passing year, and video consumption is a huge driver of that trend. That is an issue.


Video consumes so much bandwidth, and yet video content is priced so low, relative to the consumption, that there are limits to what mobile operators can charge.


Consider the example of a Netflix subscription costing $8 a month and offering the ability to stream movies that consumer up to a gigabyte per movie. If you assume a mobile gigabyte of usage costs between $7 a gig and $15 a gig, you see the problem.


Any significant amount of usage will drive data charges beyond the consumer’s willingness to pay, unless offload to Wi-Fi is readily available.


Fixed Internet access networks with effective usage limits in the hundreds of gigabytes are one thing. Mobile allowances typically in single digits are another matter.


The point is that it might never actually be possible to price consumed Internet capacity in a way that closely associates price and consumed bits, in a linear manner, and with consistently satisfactory profit margins.


Ironically, the more success mobile operators are with low-bandwidth Internet of Things applications and sales, the better the odds profit margins can be sustained. Narrowband applications (voice, messaging) traditionally have had the highest profit margins in the mobile business, in a bits per Hertz sense.


And that likely is key to 5G and future profit margins, on a profit per bit per Hertz basis. Sell the apps, not the access. 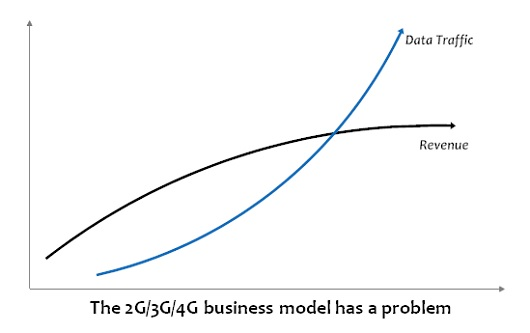