Since 2011, India’s government has been committed to extending optical fiber backhaul to some 600 million potential users in rural areas. So far, it has made slow progress, having installed about five percent of the planned million miles or so of backhaul facilities.


In 2013, 1.06 billion Indians were still without Internet access, according to a report by McKinsey & Co. In 2013, Internet penetration was 15 percent in India, compared with 46 percent in China.


Availability of backhaul facilities is part of the problem. About a million miles of backhaul fiber is required to reach 250,000 village clusters in India to the Internet. The original plan estimated that 370,000 miles of cable would allow connection of community centers, hospitals and schools as part of the National Fiber Optic Network  launched in 2011.


Full completion is expected to cost about $11.2 billion, about four times what was originally planned. 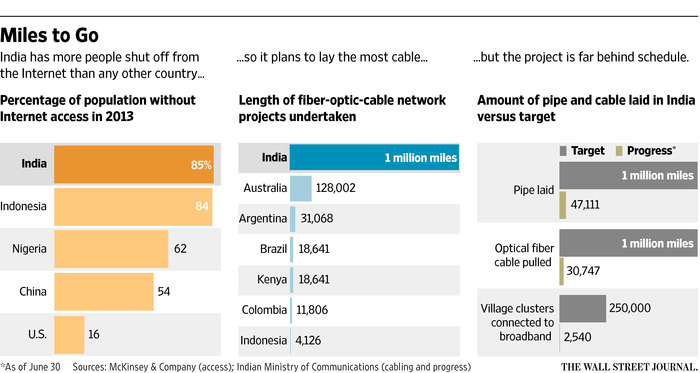