Nothing is less controversial than the assertion that the telecom business is changing in fundamental ways. Much more controversial are the implications of the changes.


Most controversial of all are predictions that failure now is a possibility.


It is not controversial to argue that “the old telco business model is breaking up,” as Dan Bieler, Forrester Research principal analyst, says. In many ways, the legacy business models are challenged because all the legacy revenue streams are under pressure, and many clearly are declining. Those which are not declining face margin pressure.


It would be reasonable to argue that “telcos are at a crossroads.” Nor would it be unusual to argue that fundamentally different new strategies and roles in the ecosystem will be adopted.


Generally speaking, observers believe the fundamental choices revolve around the roles of
“transmission” (“pipe”) and “services” (apps). One choice is to become a low-cost provider of transport and access services, fundamentally eschewing apps.


In other words, one path forward is to embrace the wholesale model, and deemphasize or abandon the retail role.


Some might feel uncomfortable about that choice, but it is the full embrace of the “dumb pipe connectivity” model.


The tougher path, one might argue, is the full transition to a new model built on some combination of IP ecosystems apps and functions. That is harder to describe or achieve, as it requires creating a major new role in the IP ecosystem beyond connectivity services.


Fundamentally, that embrace of the retailer role could include either a new distributor role (like cable TV, where the access provider bundles apps) or an app creator role.


Perhaps obviously, the bundler or distributor role will be easier than the “app creator” role, which essentially requires that a telco become a Facebook or Google. Most agree that will be difficult.


More feasible is to become a Netflix, bundling OTT content or apps created by others.


What also is new is the possibility of complete failure: going out of business.


That would have been unthinkable in the monopoly era. Communications was--and remains--a vital form of infrastructure. There being no other possible providers, the sanctioned monopoly providers could not be allowed to fail.


That no longer is true. Failure is possible, and replacement providers generally are available. That means, in the coming era, the possibility of business failure by virtually any former monopoly services provider.


That possibility will become a reality, Bieler argues. “At this stage, I see few reasons to be optimistic about the prospects for most telcos to recover the ground they’ve lost to other players in the emerging digital ecosystems.”


Bieler cites a few of the shifts that have lessened service provider value.


That is a simple function of the shift to Internet Protocol, which specifically, and by design, separates app from access. The protocol itself shifts value to “over the top” applications that can be used on any access platform.


That shift opens the way to third party creation of important apps, without the permission of the access and transport suppliers that once owned and controlled the few important consumer apps (voice, mobile voice, messaging, entertainment video) and some of the important business customer apps.


In fact, the future of the consumer segment business might follow the earlier evolution of the business segment, where apps (information technology) largely is supplied by the software providers, while telcos and other service providers mostly supply the transmission function.


That explains the potential importance of the shift to cloud computing, as it provides one new way for traditional telcos to acquire new value. If all computing shifts to the cloud, then not only is role of connectivity heightened, but the physical layer revenue models extend to data centers that become the functional equivalent of the legacy central and tandem switching centers.


In the enterprise segment, which has become more strategic for any number of communications service providers, telcos are not necessarily the top choice where it comes to supplying voice, data or managed services, Bieler points out.


“Business and IT users trust systems integrators and independent solution specialists more than telcos with a wide spectrum of voice, data, and managed services,” he says.


That will be seen as controversial in some quarters, though not likely in the telecom industry.


“As part of the net neutrality debate regulatory bodies oppose various telcos’ attempts to explore commercial relationships with content and service providers regarding the delivery of content via prioritized connectivity,” Bieler says. “At the same time, regulators refrain from applying the same regulation for over-the-top communication services as for telcos.”


One doesn’t have to agree with the notion that OTT apps and services should be regulated as legacy services are. One can argue that service provider apps should have the same freedom as OTT apps, instead.


Advice is easy to give: do a better job with customer service, move faster, partner with OTT providers, embrace wholesale, cut costs, innovate faster. Those are among the common bits of advice typically offered.


In the end, connectivity likely will remain the most valuable cash-generating asset, Bieler argues.


There is one simple reason: the protocol stack specifically creates a role for the physical layer, and telcos traditionally have had that role. The one function where telcos and other service providers have core competencies is the physical layer, the actual means of connecting users and app owners.


One need not insist that the only way forward is a wholesale-type role to insist that the physical layer is the one layer of the protocol stack where access and transport providers have unique functions and core competencies.


Bieler’s fundamental view of options is not unusual. Some telcos will transform in significant ways, adopting new roles in the cloud and IP infrastructure. Most will shift to an accommodation with OTT supply of apps, likely moving more to a wholesale revenue model.


That’s the “glass half full” view. The “glass half empty” view is that some legacy operators will simply fail to make the transition, and will go out of business. Failure is a real possibility, because alternative suppliers are available. 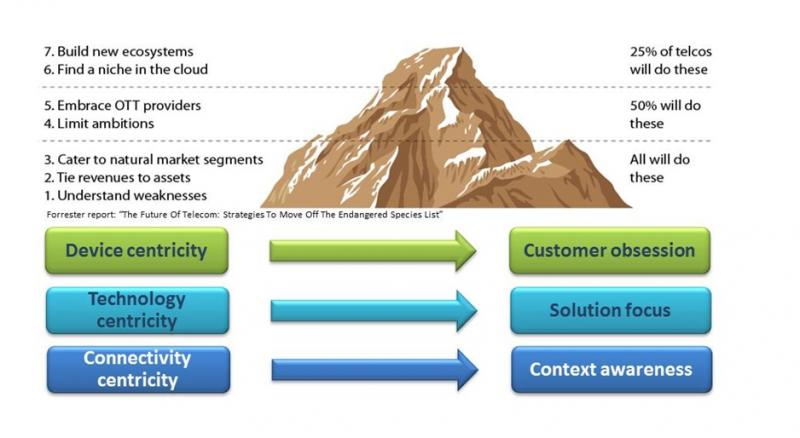