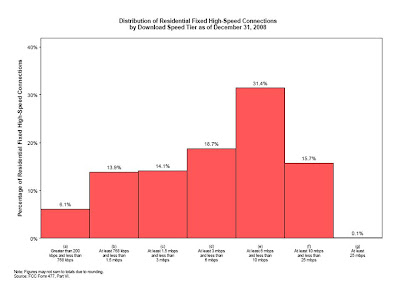 Many have focused on those portions of a recent Federal Communications Commission report on the state of U.S. broadband that suggest 14 million to 24 million Americans cannot get broadband access at speeds of 4 Mbps or higher.

But the FCC also released another report with some perhaps-surprising color on broadband access.

One interesting factoid is that 66 percent of U.S. consumers already are buying access services running at bandwidths between 3 Mbps and 25 Mbps, with 31 percent using services running between 6 Mbps and 10 Mbps.

Actual users might agree that higher speeds are desirable, but few likely would agree their connections are not highly useful, despite the lower bandwidths. Value is partly based on "speed," but also is based on other important attributes, such as whether the connection is tethered or fully mobile.

Mobile services tend to cost more than fixed services, on a capacity-per-dollar basis, but that in itself would not explain the growing popularity and use of mobile broadband.

Despite arguments by many observers that U.S. fixed-line broadband access services are not competitive, it is a curiously "uncompetitive" market where speeds double every four years, for more than a decade, growing 20 percent a year over the last 13 or so years.
Prices are a harder thing to measure, given the changes in the basic product over time. In other words, what a consumer pays today for a broadband connection is not an "apples to apples" comparison, given the doubling of speed every four years. The "product" a consumer can buy today, for any nominal price, is a different product than was purchased four, eight or 12 years ago.
Nevertheless, the American Consumer Institute notes that, between 2004 and 20009 alone, Internet access pricing declined 23 percent.
Another academic study suggests cable modem prices grew 0.8 percent, while digital subscriber line prices grew five percent, between 2004 and 2009. At the same time, cable modem speeds increased 85 percent while DSL speeds increased 80 percent, that same study found.
On a cents-per-bit basis, cable modem prices declined 45 percent, while DSL cost dropped 42 percent. Over that same period of time, the consumer price index grew 14 percent.
Fuel prices increased 26 percent, food increased 15 percent, housing increased 13 percent, medical care prices increased 21 percent and education increased 32 percent.
It is a strange "uncompetitive" market indeed that has doubled "quality" (speeds) every four years while prices overall have declined 23 percent.
Some observers have suggested that the Google-Verizon agreement on how to handle network neutrality is a concession by Verizon that fixed-line broadband actually is "uncompetitive," or at least not as competitive as wireless broadband is. Some observers might argue that Verizon has conceded nothing of the kind.
The FCC study, one might argue, suggests that despite the apparent lack of competition in the fixed-line broadband market, the data suggest consumers are indeed reaping the benefits of competition.
at August 25, 2010