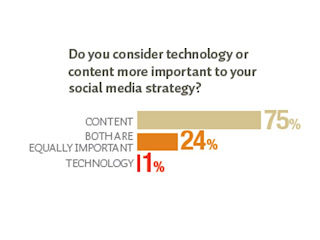 About 72 percent of executives recently surveyed say they have a social media strategy in place. Of firms without an existing strategy, 80 percent say they will create one within the next 12 months. As you would expect, 85 percent of survey respondents say that original content is critical to the success of their social media campaigns.

Branded original and expert content is used more often than any other type of content, and audience development is one of the top objectives of marketers.

That finding alone points up what has become increasingly obvious with the growth of blogging and other self-publishing platforms. These days, firms themselves have become "media," producers of content. That obviously should have some important impact on the use of, support of, and health of traditional "media" outlets, shouldn't it?

In a sense, firms face a new sort of "build versus buy" decision in areas that used to be part of the marketing budget devoted to "advertising" and "web" spending. Firms can find "media" that already have aggregated the target audience, or firms can do their own media and create the target audience. In the former case, firms will "buy" placement in existing media, while in the latter case they will create their own media, and shift spending that used to go to "advertising" into "content production and distribution."

Fully 43 percent of respondents said they don’t need to show positive return on investment to get social media funding from their organization, as it apparently is clear to all that something new is beginning and the important thing right now is to get started, start learning and refine techniques as successful practices and approaches are discovered.

King Fish Media study, co-sponsored by HubSpot and Junta42, surveyed more than 450 senior management and marketing executives on their social media investments as part of the study.

As you would expect for activities that still are considered experimental, only nine percent of surveyed organizations have full-time positions dedicated to managing social media responsibilities, while 90 percent include those as part of someone’s overall responsibilities.

About 85 percent of companies are handling their social media efforts internally.

Video content (51 percent), user case studies (45 percent), and reviews (41 percent) are also used by roughly half of all respondents.

There seems a clear understanding that social media and networking are becoming more important, but it is just as clear that marketers are still struggling to identify best practices.  If you remember how the World Wide Web first was used by firms, and how it developed, you know it is part of the process.

That understanding also explains why 64 percent of firms aren’t yet requiring definitive measurable ROI to justify their social media budgets.

To download the complete findings of the King Fish Media Survey, go here http://www.kingfishmedia.com/marketing-resources/research/social-media-usage-2010/.
at August 23, 2010