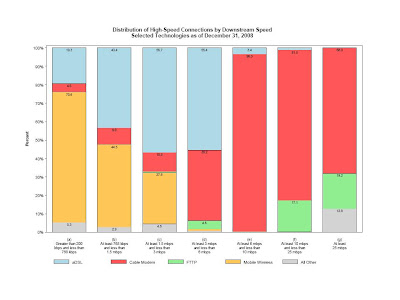 Some observers, apparently without reading the actual detail of a recent Federal Communications Commission report on the state of U.S. broadband access, have deplored the woeful state of broadband in the United States.

But they miss the many nuggets buried in the report, or the subtlety and complexity of assessing where broadband now stands.

Some readers will miss a major definitional change made in the report, which redefines broadband as a downstream speed of 4 Mbps or more.
Click on the image for a larger view.

There is in one sense no particular reason to quarrel with any particular set of figures for the broadband threshold. Some figure of merit has to be used. But the FCC rather significantly redefined the standard from the old "200 kbps" figure of merit to 4 Mbps. That has the effect of dramatically expanding the ranks of users who today do not have broadband today, but did yesterday.

That makes comparisons over time more difficult. But the FCC has made other changes as well, such as including mobile broadband in the survey.

The chart shows how this affects the results. For starters, lower-speed mobile connections have value that goes beyond mere downlink speed, namely mobility. In other words, mobile broadband is valuable, even when it offers less downstream bandwidth, because it is mobile and can be used mostly anywhere the mobile network will work.

The same sort of issue exists with mobile voice, compared to fixed voice. Mobile voice might be more expensive, on a per-call or some other metric, but most users would agree that it also offers more value. It is untethered, and also supports texting, music playing, email and Web access, for example, plus personalization.

The data might indicate there are lots of 3 Mbps or slower connections, but a great percentage of them are wireless broadband connections whose "value" is not captured if one only looks at download speeds or bandwidth.

More bandwidth is better, and bandwidth tends to double about every four years in the U.S. fixed broadband access market. But fixation on bandwidth alone does not make sense when wireless services are included in the same index as fixed broadband. That is akin to comparing the value of mobile voice and fixed voice looking simply at prices per call, price per month or subjective measures.
at August 24, 2010