How Many Screens Now are Relevant? 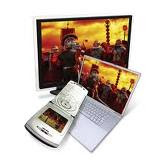 Not so long ago, "three screens" were the foundation of consumer multichannel video strategy, those screens being the TV, the PC and the mobile device. With the advent of the e-book reader, perhaps one can add a fourth screen. One can argue that the tablet PC now becomes a viable fifth screen.

There are probably other ways to conceive of "screens," some based on behavioral metrics or applications, rather than devices. Right now, though, it is virtually every other screen than the TV that is getting most of the attention, and rightly so.