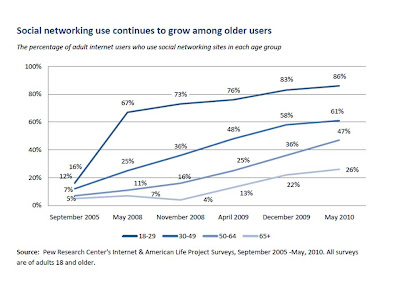 While social media use has grown dramatically across all age groups, older users have been especially enthusiastic over the past year about embracing new networking tools. Social networking use among internet users ages 50 and older nearly doubled—from 22 percent in April 2009 to 42 percent in May 2010.

During the same period, use among those ages 65 and older grew 100 percent--from 13 percent to 26 percent.
By comparison, social networking use among users ages 18-29 grew by 13 percent—from 76 percent to 86 percent.