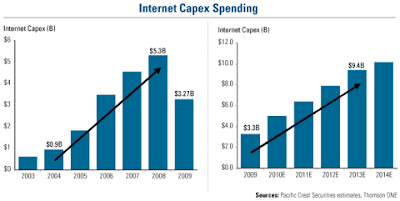 According to tech research firm PacificCrest, the global technology buildout is a $200 billion opportunity over the next five years.

During the last cycle (2004-2008) the top five Internet firms spent roughly $15 billion on infrastructure, but that figure is expected to jump to $28 billion over the next four years.

Traffic Jam on the Information Superhighway
at August 22, 2010