Is Value of Fixed Networks Higher in Western Europe than in United States?

As has been the case for decades, service provider strategies have been diverging since the end of monopoly regulation.


The longer-term strategy in Western Europe seems to be that leading operators will adopt a mobile-plus-fixed approach intended to support quadruple-play services.


Comcast in the U.S. market is likely to take the same approach.

More questions surround ultimate strategies to be taken by mobile-only providers such as Sprint and T-Mobile US, or integrated carriers such as AT&T and Verizon.

European executives might argue that a "mobile-only" approach cannot succeed in their markets. Whether that will be the pattern in the U.S. or Canadian markets is not yet determined.

Market structures tend to be different in Europe and North America. In Europe, it is more common that a single network provides fixed services. That is not the case in North America, where two and sometimes three fixed networks compete.

The practical implication is that the "value" of a fixed network might be higher in Europe, compared to North America. Nor is it so clear that a mobile network cannot provide every essential quadruple play service (mobility, voice, high speed access, video entertainment).


In Europe, the quadruple-play strategy might be understood to mean that a “mobile-only” approach will not work as well as an integrated strategy.

Others might argue the quadruple play actually can be provided by a “mobile-only” network, especially as 5G and later networks become the norm.


In that regard, one major difference in strategic options might be that, in Europe, cable TV is not a ubiquitous competitor to telco fixed networks.

Western European fixed and mobile service providers arguably have had the toughest revenue trends of operators in any region, owing to a multi-year negative revenue trend.


It appears as though the 2013 low point now has passed, with slight revenue growth for service providers reached in 2015. 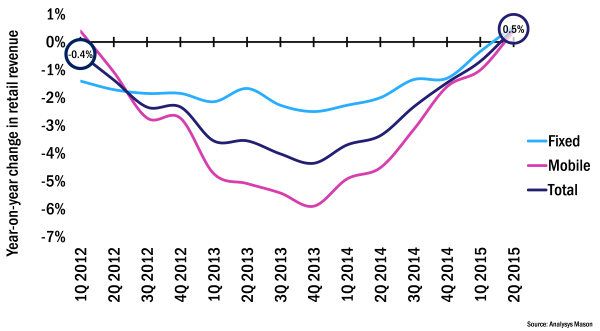