At the risk of sounding unduly skeptical, when something doesn’t make sense, maybe that is because it simply “doesn’t make sense.” More positively, perhaps an ecosystem has simply not had enough time to develop.


Analysys Mason, for example, calls for telcos to shift to a platform-based model.


“Platforms are the key to success in the digital economy,” Analysys Mason analysts argue.To be clear, that means creating a role something like that possessed by Apple, AirBnB, Alibaba, Amazon, Facebook, Google, LinkedIn, Rakuten, salesforce.com, Uber, Xbox and others.


Platform providers build ecosystems around their core business. Apple and Google have thousands of developers and hundreds of accessory manufacturers continually creating complementary products for each ecosystem.


Presumably that means telcos become a platform for managed services. That, in turn, probably suggests a “business-to-business” role, rather than a “business-to-consumer” role.


That assumption is driven by the idea that most consumer apps can be delivered and accessed directly by end users using Internet delivery. It is hard to see how any access provider becomes a platform for an Internet app or service, which are themselves platforms.


A managed service, on the other hand, might well require, or benefit from, platform services. Most industrial Internet of Things apps, autonomous vehicle systems and health monitoring services might provide examples.

It is becoming a common recommendation. Telcos can become “Integrated Digital Service Providers” (IDSPs) that function as platforms, Accenture argues, essentially getting out of the “communications” business.


In yet one more iteration of the “moving up the stack” strategy, Accenture suggests telcos can become “platform companies” that use social, mobile, analytics and Internet of Things tools  to build a business architecture and set of services that enables other businesses to rapidly develop and deploy the products and solutions needed to drive their digital strategies.


That probably sounds like “middleware” to some; “operating system” to others.


Time will tell whether any firms actually will be able to become “digital platforms,” or whether, in the end, the effort will fail. Once upon a time some thought mobile operators could emerge as primary “app stores.” Instead, it is the leading device ecosystems that operate the most-powerful app stores.


And even if a B2B IoT platform role does emerge, it might not be access providers who are the inevitable platform providers. Ericsson, for example, has launched an IoT accelerator service, much as it also earlier launched operations outsourcing services for telcos.


The IoT Accelerator is a combination of Ericsson products and services, with an integrated marketplace for collaboration and monetization.


Scheduled for a global launch at the end of the third quarter of 2016, and to be offered as a service, Ericsson initially is targeting larger industrial and public contracts.


Ericsson says the IoT Accelerator will  help its customers overcome the cost and complexity barriers of trying to build their own platform up-front.


The spur to such thinking is simply the declining fortunes of the access business.


Telco 2.0’s generic model of revenue decline for converged telco in advanced market is not comforting. It suggests a steady decline in overall revenues from 2016 forward.


We can dispute the shape of the curve, but few might disagree with the direction of the change. Legacy revenues will be challenged, requiring a search not only for new products to sell, but perhaps even a changed role within the ecosystem.


Aggregate revenue could drop 13 percent between 2016 and 2021. Virtualizing more operations obviously helps if it can reduce operating or capital expense. But the bigger problem is simply that revenues to be derived from all legacy products are shrinking. 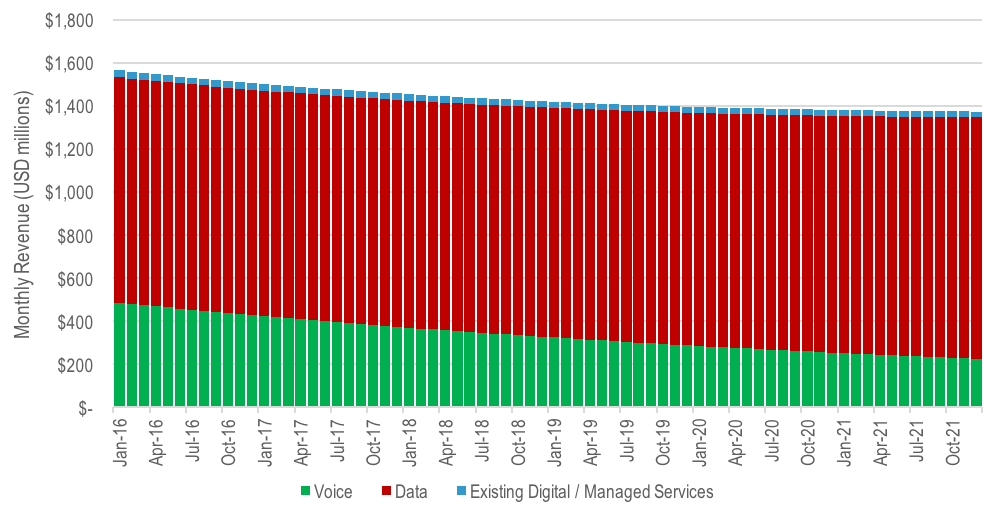