Different business models now showing up in AT&T and T-Mobile US operational results. T-Mobile US touts its success gaining phone accounts. AT&T is growing in other lines of business, including video and Internet of Things.

One can compare the mobile net adds, certainly. Still, for T-Mobile US, mobile is the whole business, and ability to take phone accounts is what matters.

AT&T has shifted its growth efforts to Mexico and entertainment video, quickly. The two firms always had competed in different market segments. But that difference now has widened.

T-Mobile US appears once again to be capturing most of the net account growth in the U.S. mobile business in its first quarter of 2016, much as cable TV firms are gaining nearly 100 percent of the net growth in the fixed line Internet access business.


We will know for certain, soon enough, but some believe the first quarter will show that all the leading four firms gained net phone accounts.


Indeed, AT&T says that “Cricket and connected devices drive strong U.S. subscriber growth.” By omission, that suggests branded postpaid phone adds were not the strength in the quarter.


The market is “North America,” adding Mexico net adds. T-Mobile US reported U.S. adds only, since that is where it operates. Also, AT&T reported “Cricket” adds, which are prepaid accounts. T-Mobile US does break out account net adds that are not “branded postpaid.”


AT&T does report it added a net 712,000 branded (postpaid and prepaid) phone net adds. But that also suggests many of AT&T’s net adds were either tablet or other non-phone net adds, such as Internet of Things sensors.


AT&T has a global enterprise business that T-Mobile US does not support. Also, AT&T is the largest fixed network services provider in the U.S. market. T-Mobile US is mobile only. 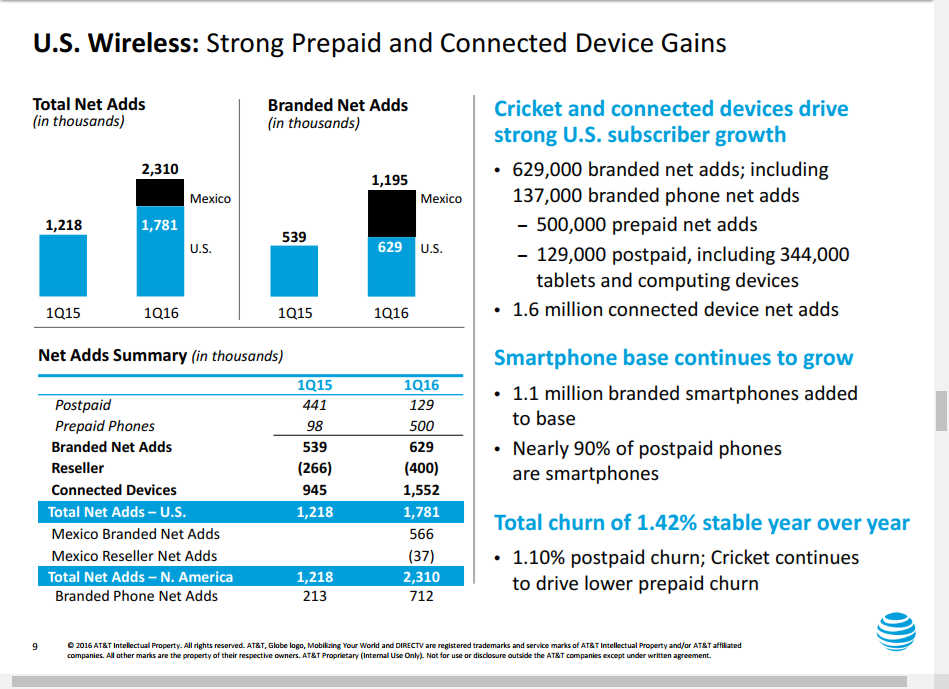 
T-Mobile US says it added 2.2 million total net adds in the first quarter of 2016 and more than one million postpaid net new accounts, of which about 877,000 were phone accounts.


T-Mobile US also had retail prepaid net growth of 807,000 accounts.

The quarterly subscriber results do indicate that T-Mobile is adding accounts, including important postpaid phone accounts. But the results also come from two companies with substantially-different business models.
at April 26, 2016