Which is to say, the key drivers of the business. Though well understood now, the fundamental change in access network economics was not immediately and universally understood.


Consider any one-product service provided by a single provider with 80 percent installed base or take rate. Add one competent new supplier, and theoretical “maximum” share for each provider drops to 40 percent. Add a third competent supplier and theoretical maximum share drops to 33 percent.


That change alone would destroy the original economics and business model. Triple play now is foundational because it directly addresses competitive market dynamics: three products can be sold to a smaller number of potential customers.


If each unit sold (for example) is about $40, then per-account revenue could be $120, not just $40 if a single product were the only supplier option.


But stranded assets remain a problem, which is why Google Fiber and so many other gigabit providers now pre-qualify areas for network upgrade or build based on expected demand. That avoids expensive investment where returns are likely to be low or negative.


“The ILECs’ low cash flows reflect the continuously increasing cost of sustaining a ubiquitous network that is now serving roughly a third of the lines for which it was engineered,” argues Anna-Maria Kovacs. In other words, 66 percent of the deployed network does not actually generate revenue.


In other words, when the percentage of customers on the network is about one out of three locations, most of the network access investment is stranded. Dead. Inert. Not producing revenue.


“At the 2015 ILEC penetration level of 35 percent of peak, total network cost per remaining subscriber has essentially doubled and the networks passed the inflection point beyond which penetration losses result in catastrophic cost increases,” says industry analyst Anna-Maria Kovacs,  visiting senior policy scholar at the Georgetown Center for Business and Public Policy.


By way of contrast, cable TV networks still are operating in the flat part of the cost curve. That is a function of having paying customers on perhaps 80 percent of passed locations. 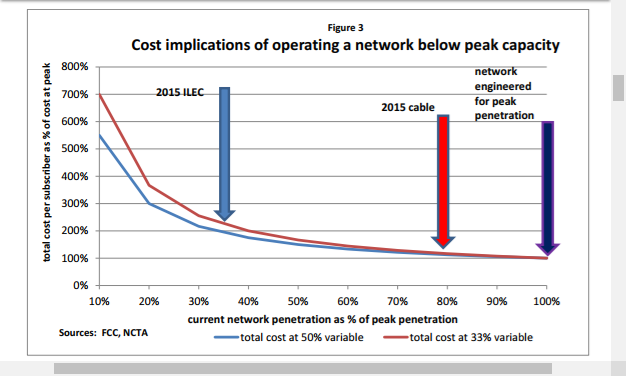 Metro access providers and business communications specialists such as Zayo and Level 3 have more ability to target investment. So, less risk of asset stranding.


Perhaps you can imagine a scenario where telco stranded asset problems lessen. In an optimistic scenario, telcos create or discover some new unique application that drives take rates back over 50 percent.


In a negative scenario, stranded assets are not an issue in the case of market exit. Verizon, for example, with a relatively small fixed network footprint among tier one providers, might welcome a chance to exit the fixed network business entirely, as a facilities-based provider.


That doesn’t mean Verizon would have no chance to sell services to fixed network customers of its choosing. It would simply lease those assets, probably at favored rates as part of an asset divestiture.


Lack of willing and able buyers, plus regulatory opposition, make that an unrealistic possibility for the moment.

The stranded asset problem is not going to disappear, or lessen, in terms of intensity. The only issue is what ultimately is done to “make the problem go away.”
at April 12, 2016