What if Information Technology and Communications Do Not Boost Productivity?


The absence of huge productivity gains has created what economists call the “productivity paradox.”


Basically, the paradox is that the official statistics have not borne out the productivity improvements expected from new technology.


In fact, some might argue that higher investment in information technology investments have provided value less than expected.  The implication is that such investments should be avoided or limited.


To make the point, most of us assume such investments drive economic growth. We actually do not know that, as an economic certainty.


Of course, none of that is likely to matter. We will behave as though high speed access is a necessary good, without any actual understanding of cause and effect.


Some economists, and many business executives, might agree that productivity growth driven by applied information technology does not seem to be in much evidence in the 2016 market, Uber notwithstanding.


Many studies attribute a mid-1990s U.S. productivity surge to the direct and indirect effects of information technology investments, according to John Fernald, an economist working for the Federal Reserve Bank of San Francisco.


But such gains do not last forever. To be specific, by the mid-2000s, the low-hanging fruit of IT had been plucked, he argues, which accounts for a productivity slowdown in the broader U.S. economy.


Industry data support the IT story for the mid-2000s TFP (total factor productivity) slowdown, he argues.


That raises a question: if productivity gains driven by prior waves of technology now yield mostly incremental and modest gains, then the value of additional IT investments might be questioned.


A related question: what new wave of technology, applied to business processes, could reignite a wave of economic growth?


Historians of technology argue that a broad wave of technological breakthroughs led to a surge in productivity growth after World War I that finally played out around the 1970s. Among those drivers were electricity, the internal combustion engine, chemistry, entertainment, information, and communication.


Some would point to one-time gains from infrastructure programs such as the construction of the Interstate Highway System. An important corollary: any second wave of investment in similar infrastructure would have “one time” effects that would not be long-lasting.


IT-producing industries saw productivity explode in the 1995-2000 period. But after 2000, productivity returned close to its pre-1995 pace.


“IT led firms to innovate in how they manage sales, inventories, and supply chains; the Internet is an extreme example, in that it made possible completely new ways of doing business,” according to Fernald.
For a wide swath of the economy, improved ability to manage information and communications has led to changes in how firms do business.


The gains from the IT revolution came after a period of subdued productivity growth. A working paper in 2014 by John Fernald (Federal Reserve Bank of San Francisco) asserts that productivity growth was “exceptional” due to the tech-boom and was restored, prior to the Great Recession, to “normal” levels of 1973-95. 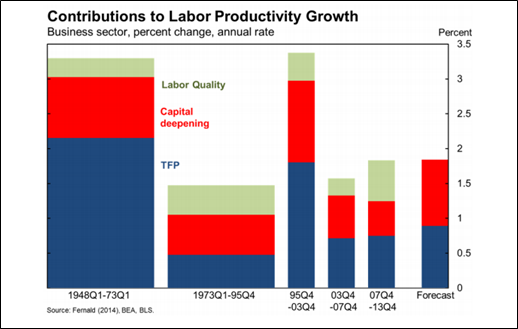 The relative underperformance of information technology investments recently is a problem. It suggests we will have to wait for the next wave of advancements to boost productivity.

And some might suggest the value of IT investments has to be weighed against investments in other parts of any business that could have equal or higher returns.
at April 08, 2016