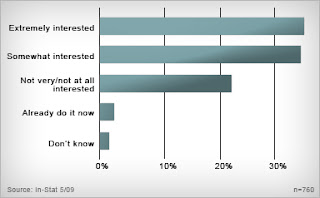 Nearly 37 percent of broadband households in North America are "extremely" or "very" interested in viewing over-the-top video content on the home TV, according to In-Stat.

By 2013, In-Stat predicts that nearly 40 percent of all digital TV shipments will be Web-enabled devices. Across all categories, there will be over half a billion Web-enabled consumer electronics devices in operation worldwide by 2013.

Shipments of such Web-enabled devices will see a compound annual grow rate of nearly 64 percent between 2008 and 2013, In-Stat predicts.

It always is hard to tell how well consumer input of this sort will translate into actual behavior, especially when spending on one category of purchases has to be shifted from some other existing category of expenses.

Doubtless the stated intentions are closer to reality when there is no incremental cost to view such content, and drops fairly predictably as the price of doing so raises above "zero."
at February 23, 2010