Social Networking is King on Android and iPhone 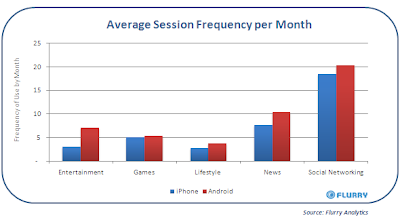 A new analysis by Flurry of smartphone application use confirms what earlier data had been suggesting: social networking is the smartphone "killer app."

The February 2010 data shows social networking sessions on either the Apple iPhone or Android devices approach or hit 20 sessions a month.

That compares with seven to 10 news app sessions, about five gaming sessions and three to seven entertainment sessions.

The other notable trend here is that Android users appear to use smartphone applications at a higher rate than iPhone users do. One might have thought that most of the early adopters already had opted for iPhone, and one clear characteristic of iPhone users is that they make use of the mobile Web and Internet at much-higher rates than other smartphone users.

Until the Android, that is. Android users appear to behave as iPhone users do, only more so. One might have hypothesized that Android users might be more mainstream, and tend to use entertainment apps more than iPhone users. The Flurry data does not necessarily confirm that thesis.

Aside from the fact of being heavier users, Android and iPhone usage patterns, across applications, appear to be identical. To the extent that Android devices, perhaps especially the Verizon Droid, have been seen as competing directly with the iPhone, the data suggests that early adoption fits the appellation.
at February 12, 2010