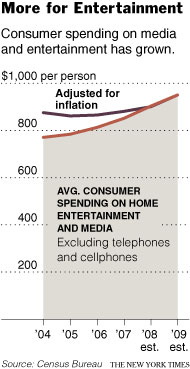 Many economists and market watchers think consumers eventually will return to spending patterns as they existed prior to the recent recession, and on the growth pattern of the 20 years before the recession.

Others warn that growth patterns are more likely to revert to patterns of the 1945 to 1970s, when annual growth in consumer spending was much more restrained.

So the question for many might be, which view is right? For application and service providers, the question might not be as germane. The reason is that consumer spending on network-delivered services and applications was stable over the entire period, and in fact has shown a slow, steady growth.

In other words, people are shifting more of their available entertainment budget to network-based products. Communications spending likewise has slowly grown its percentage of overall discretionary spending, not fluctuating wildly from one year to the next.

Of course, lots of other background factors have changed. There are more products, more applications, more services and providers to choose from.

The value of many products has taken on an increasing "network services" character as well. Consider the value of a PC without Internet access, for example.

The point is that whichever forecast proves correct--either a return to the growth trend of the past two decades, or a reversion to the lower spending growth of the years 1945 to 1979, network-based products are likely to continue a slow, steady, upward growth trend. That may not be true for other industries.
at February 09, 2010