We are in Uncharted Territory, But Get Ready for Change 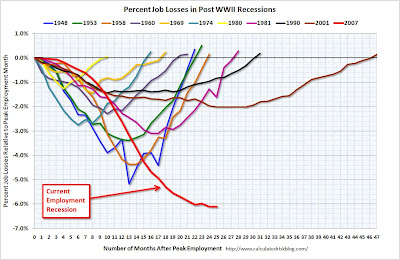 This graph shows U.S. job losses from the start of the recent recession, in percentage terms. As you can see at a glance, the recession has been an outlyer. Click chart for a larger view.

As they say, "we are in uncharted territory." I use the past tense deliberately, meaning only that by most measures, we passed through the bottom as early as March 2009 and are now, in halting fits and starts, in a growth mode.

So it might be time to stop talking about "recession-induced" behavior, even though we are, by the most recent estimate, down about 8.1 million jobs since the recession began. All other things being equal, it makes most sense to look for signs of changing behavior as the recovery takes hold, as slow as that might be.

The main thing now, despite the severity of the downturn, is how behavior will start changing. It is as important to anticipate what people will do, instead of gearing one's business to "how they have been recently behaving."

The reason is simple: by definition, the economic background is changing, meaning people will start to have opportunities to change recent behaviors. As the economy recovers, new discretionary spending is going to build. It will be spent somewhere. So the issue is anticipating how, and skating to the puck.
at February 05, 2010

Email ThisBlogThis!Share to TwitterShare to FacebookShare to Pinterest
Labels: recession