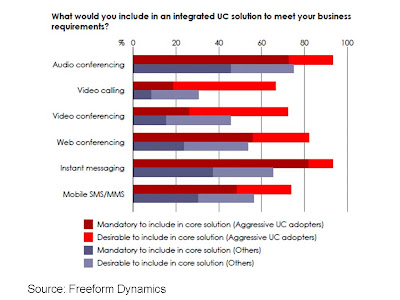 UC is often thought of as a broad solution set including a unified directory, unified messaging, a single number (find me, follow me), presence awareness and the ability to track all forms of communication, say Josie Sephton and Dale Vile, Freeform Dynamics researchers.

What seems to have changed lately is the increased role conferencing solutions seem to be playing as parts of an integrated UC solution. Among lead adopters, audio conferencing is viewed as a mandatory feature by more than 70 percent of information technology executives surveyed by Freeform Dynamics.

More than 40 percent of all respondents said that audio conferencing is mandatory (Click on image to see larger view).

Instant messaging is seen by more than 80 percent of early adopters as a mandatory feature. Nearly 40 percent of all enterprise IT executives say IM is necessary.
at February 07, 2010