How PC Usage is Different from Mobile 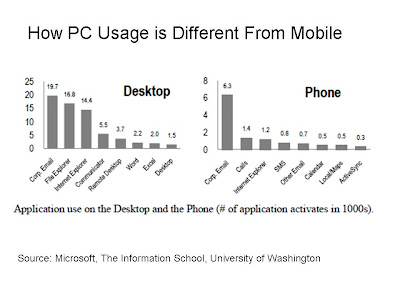 To state the obvious, users behave differently on their mobile devices than they do on their PCs, which ought to have implications for a world where perhaps half to two thirds of all Web and Internet access is from a mobile device.

A study of 16 information workers over a period of time illustrates some of the differences (again, keeping in mind that habits likely continue to evolve).

Mobile service providers, for example, know there is a huge difference between users on PCs and smartphone users.

Namely, PC users consume lots more data. And that is what the study conducted by Microsoft and the University of Washington also noted. The other obvious observation was that phones are used for voice and text messaging. PCs can be used for those applications, but in this study of office workers, that was not the case.

And productivity applications, though important for desktop use, was not the focus on mobiles, where "maps" seem to be more important, as you might expect. Users relied on both devices for email and Web access. Beyond that, the usage profiles were different.

Aside from the sheer difference in volume, understandable given the "on the go" nature of a mobile phone, users did different things on their mobiles. One might hypothesize that mobile device input-output limitations and time constraints (people are on the go) account for much of the difference in behavior. Heavy document or file interactions are not prevalent on mobiles.

That doesn't mean people will stop doing things at their desks that require full PC support. It does suggest that as use of mobiles becomes a bigger driver of Internet usage, the key applications will change. Mobiles are "becoming PCs," but that does not mean they will be used the same way, at all. The Microsoft study simply confirms that fact.
at February 08, 2010