Apple and RIM Are Winners in Handset Market, Profit-Wise 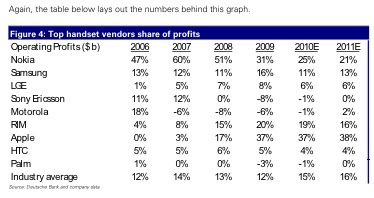 The Apple iPhone might not be the only reason the mobile handset market has changed over the past several years, but it is a major influence, according to a new analysis by analysts at Deutsche Bank.

In 2006, Sony Ericsson had 11 percent share. By the end of 2010 it will have a negative one percent operating profit.

Motorola had 18 percent share in 2006 and will have declined to about a negative one percent by the end of 2010.

By the end of 2010 Apple will have an estimated 37 percent share, while Research in Motion, which had four percent share in 2006, will have grown to 16 percent.

Most of the other suppliers will have remained about where they were in 2006, except for Lucky Goldstar, which will have grown from one percent to six percent.

Keep in mind, these figures reflect profits, not handset share.
at February 08, 2010