Is This Evidence of Declining Use of At-Home Broadband? 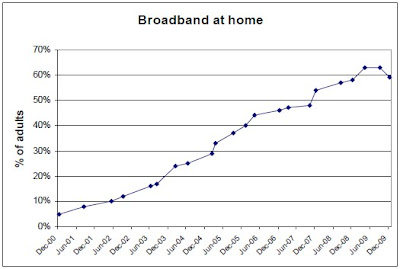 If one looks at the quarterly or annual data on broadband subscriptions during the course of the recent recession, one is hard pressed to find any significant evidence that broadband users downgraded their connections to dial-up or stopped using the Internet.

This data from the Pew Internet & American Life Project, on the other hand, shows leveling in 2009, about a year into the recession, and an actual decline late in 2009.

Some might note that a three-percentage point swing in reported behavior on this sort of survey would be within the margin of error, so it is hard to infer anything conclusively. But even a flattening would be significant, should the trend be later confirmed.

Broadband access at home has not yet ever declined. Virtually all the public firms have reported continual net customer additions, so any slowdowns or reversals might have occurred at private or smaller providers. We'll have to watch this.
at February 18, 2010