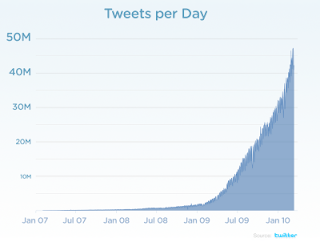 Tweet deliveries are a much higher number because once created, tweets must be delivered to multiple followers. Then there's search and so many other ways to measure and understand growth across this information network. Tweets per day is just one number to think about, he says.

Still, as with Skype's "concurrent users" metrics, it is a milestone.
at February 22, 2010