App Stores are "iTunes on Steroids" 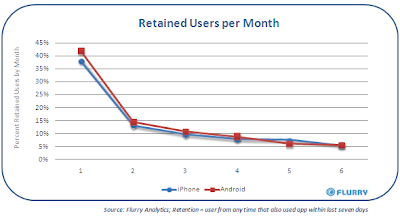 New data from Flurry suggests that most iPhone and Android applications are disposable or perishable. Most people stop using them within a month and attrition continues to the point that withint two months, less than 15 percent of users still are using the downloaded apps.

That suggests a bias towards perishable content and entertainment or games. Few people watch "news" programming or read news articles more than once, for example.

Flurry tracks over 20,000 live applications and over two billion user sessions each month, and so far show either that "content is king" or that applications are becoming the dominant delivery mechanism for content, entertainment and tools on smartphones.

The most frequently-used downloaded apps are games, entertainment, social networking, news and other "lifestyle" apps.

Retention curves (the percentage of people using an app at varying times after download) for iPhone and Android applications were nearly identical. After just a month, 60 percent of people have stopped using the typical downloaded app.

That suggests a high degree of sampling. Users seem to be downloading and using many apps, but generally are not finding them sticky enough to continue using after two to three months.

That usage profile has not proven to be the case for some other foundational apps such as text messaging, social networking or email.

In some ways, app stores are becoming publishers of content in the same way newspapers, cable TV or the Web have been; "iTunes on steroids." That doesn't mean there is no room for other apps that prove more foundational. It just means we haven't created them, yet.
at February 12, 2010