Enterprise Workers Ready to Ditch Their PCs for Smartphones? 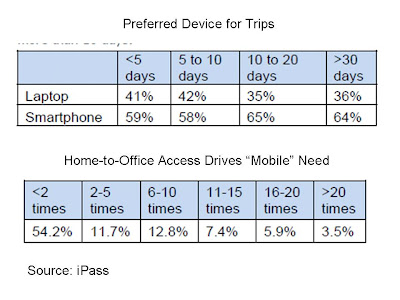 Something rather unusual seems to be happening in the enterprise mobility space. According to a recent survey taken by iPass, 63 percent of mobile employees prefer to use a smartphone, not a laptop, as their primary mobile device, for trips of any length.

That likely is testament to the high value traveling workers place on voice and text communications, as well as the increased capabilities smartphones now offer, including email and Web access.

But the findings also suggest that some enterprises are over-investing in laptops and software and might need to look at scenarios where mobile or traveling workers can get along just fine with smartphones.

There is another and possibly darker view here as well. Industry suppliers have been touting mobility investments as a driver of productivity. As it now appears, enterprise workers do not even want to carry laptops with them when traveling. So what is the value of all those investments in remote access?

Granted, most enterprises likely are trying to get a better handle on mobile phone expenses, so indiscriminate replacment might not be wise. But the survey also suggests the near-universal embrace of the BlackBerry has "soft" support from users.

"Mobility" also once was an issue of supporting traveling workers. Today every employee
is a potential mobile employee, iPass says. While many mobile employees have some business travel, many more are logging in from home.

About 68 percent of iPass survey respondents did not travel during the last quarter of 2009, but  45.8 percent of mobile employees logged in from home at least twice a month, and 16.8 percent logged in more than ten times a month.