By the end of 2009, there were an estimated 4.6 billion mobile cellular subscriptions, corresponding to 67 per 100 inhabitants globally, says a new report from the International Telecommunications Union.

Last year, mobile cellular penetration in developing countries passed the 50 per cent mark reaching an estimated 57 per 100 inhabitants at the end of 2009. Even though this remains well below the average in developed countries, where penetration exceeds 100 per cent, the rate of progress remains remarkable.

Indeed, mobile cellular penetration in developing countries has more than doubled since 2005, when it stood at only 23 per cent.

Not many will recognize this success for the great achievement it really is. Policymakers of the 1960s, 1970s and 1980s would be, and probably are, shocked at what has happened. In days past, the thinking was that getting phone service to people who had never made a phone call would be stubbornly difficult. I do not recall anybody suggesting mobile technology would do the trick.

The broadband gap, though significant, also is showing dramatic progress, and again because of mobile networks.

There is a "problem" people and organizations who "solve problems" often have: they cannot recognize victory. Many difficult problems actually get fixed. When they do get fixed, rejoice and move on.

Getting voice services and now broadband broadly adopted throughout the world is a huge, miraculous success. 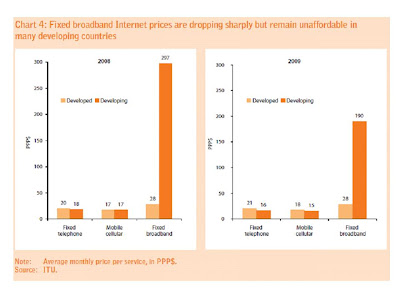