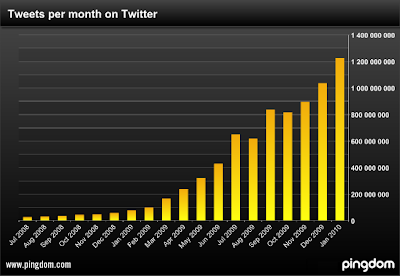 By available measures, Twitter growth has flattened, although some say the data does not include all Twitter usage from third party sites.

Usage, though, is another matter. It keeps growing, suggesting that Twitter has an established base of users that find it useful. In December 2009 Twitter processed more than one billion tweets per month, according to Pingdom.

January passed 1.2 billion, averaging almost 40 million tweets per day. This is significantly more than Twitter was processing just a few months ago.

Pingdom's data does include all tweets made using Twitter's own sites and third-party sites and applications as well.

December 2009 was the first month Twitter processed more than one billion tweets (with 1.036 billion tweets). But January 2010 had 16 times as many tweets as January 2009.

Pingdom has no data on the total number of active users.