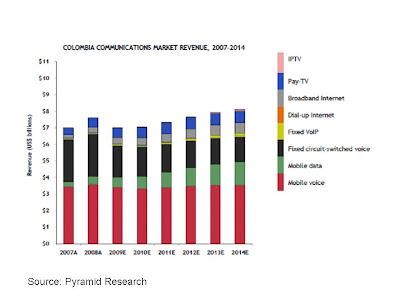 The U.S. telecommunications and network-based video entertainment markets (cable, satellite, telco) grew revenue in 2009, largely on the strength of performance by the large incumbents that account for most of the industry's revenue.

That was not the case in all markets, though, as the Columbian market, for example, declined about eight percent in 2009, according to researchers at Pyramid Research.

The Columbian market also is in major deregulation shift, so new competitors are expected, especially in the wireless area. Pyramid Research does not think any such new competitors will be able to alter the current market structure, though. Incumbency has its advantages, it seems.
at February 24, 2010