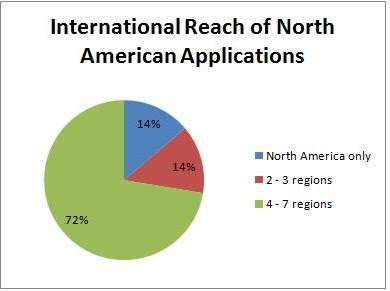 About 80 percent of North American mobile Web sites have substantial traffic from around the world, a study by Motally finds.

"If you divide the world into seven regions--North America, South America, Europe, Asia, Africa , Middle East and Oceania--80 percent of mobile sites get traffic from at least three regions outside their own. About 72 percent of applications are used in four or more regions, Motally says.

“Any investment in the mobile Web hould at least consider a global audience,” Motally says.

About 53 percent of sites and 41 percent of apps in Motally’s study drew significant visitors from all seven regions.

The other important finding is that feature phones, particularly in regions like South America, Asia and even Europe, are important devices for mobile Web traffic.

While feature phones aren’t a major component of U.S. mobile websites, they are responsible for over 20 percent of traffic in Europe and for over 40 percent in Asia and South America.
at February 04, 2010