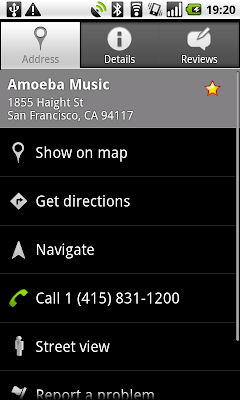 Many users have grown accustomed to the idea that their appointments, contacts and email can be synchronized across their mobile and PC devices. Now Google wants to make that same sort of experience possible in Google Maps run on Android devices.

Google Maps for mobile now will "sync" searches made on PCs with searches on Android mobiles. "Personalized suggestions" make it easy to find places users previously have searched for.
There is one immediately practical value: instead of searching on a PC and printing out directions, users now will simply be able to recall searches and have the information displayed on their mobile screens when they need the information.

"For example, imagine you're on your computer and you come across the Place Page for Mario's Bohemian Cigar Store Cafe," the Google blog say Michael Siliski and Taj Campbell, Google Maps staffers, on the Google Mobile Blog. "When you're ready to go and want to get directions, just open Google Maps on your phone, start typing "mar," and you'll quickly see a suggestion, saving you from re-typing a long query and making it easier and faster to be on your way."

The new feature also adds a way to "mark" places on your own maps that will appear on either a PC or Android display whenever a map near that place is displayed.

"When viewing place details, just press the star icon next to the place name; these starred places are automatically synchronized between desktop and mobile, and can be accessed from both the 'More' menu on your phone and from the My Maps tab on your computer," they say.

Both features are available in Google Maps 3.4. On Nexus One phones, users get this version of Maps after accepting the over-the-air update that already is in progress.

For other Android devices, starring and personalized suggestions will soon be available by downloading Google Maps 3.4 from Android Market.
at February 03, 2010